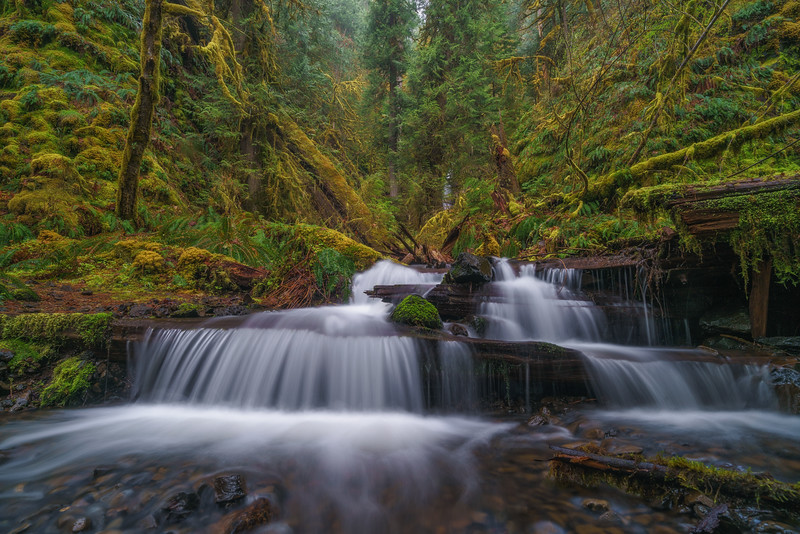 Several creeks both named and anonymous tumble down the furrowed canyon embracing the Clackamas River Trail, a delightful eight-mile stretch of old-growth forest between Fish Creek and Indian Henry Campground that stays deliciously green more months than not. Although Pup Creek Falls halfway between was Terence’s and my ultimate destination, the trail offers plenty of scenic if not necessarily photogenic sights along the way, and it's a favorite standby of mine when exercising the legs takes precedence over the lens. Still, there are just enough photo ops there when the itch strikes, and this stepping-stone creek before the ‘real’ Steppingstone Creek a half mile later offers a few.

With the showery forecast it was also a good time for Terence to test out the waterproof claims of his spiffy new Outdoor Research rain jacket. You see, Terence historically has had a hard run of it with products claiming to be able to keep you dry in a torrent, not all of them having actually specified in their labeling that the product needs to be zipped up, tied, secured, fastened, worn, taken out of its packaging, or otherwise actually used in order to impart the wearer with the ability to stay dry. As a result, he has an uncanny knack for looking like he was on the wrong end of a carnival dunk tank, even on the sunniest of days. I think he may be part Irish water spaniel, even though he looks perfectly Asian. (I know “perfectly Asian” is redundant, but just go with me on this, okay?)

This time, though, he dug deep into the bowels of his will and found the enormous discipline to actually wear his rain jacket, pull the hood over his head, and zip the zipper up almost to his neck. And just about every mile on the mile (or every other utterance of “Man, aren't we there yet?? How much longer??” depending on how you prefer to gauge it), he'd look over at me like he'd stolen fire from the gods, feign like he was testing the fabric with his fingers, and give me a slow, smirking nod while proudly announcing his verdict: “Dryyyyyyyyy…!”

Everybody’s gotta start somewhere, I guess. As Laozi once said, “A dry journey of eight miles begins with a single zip.”