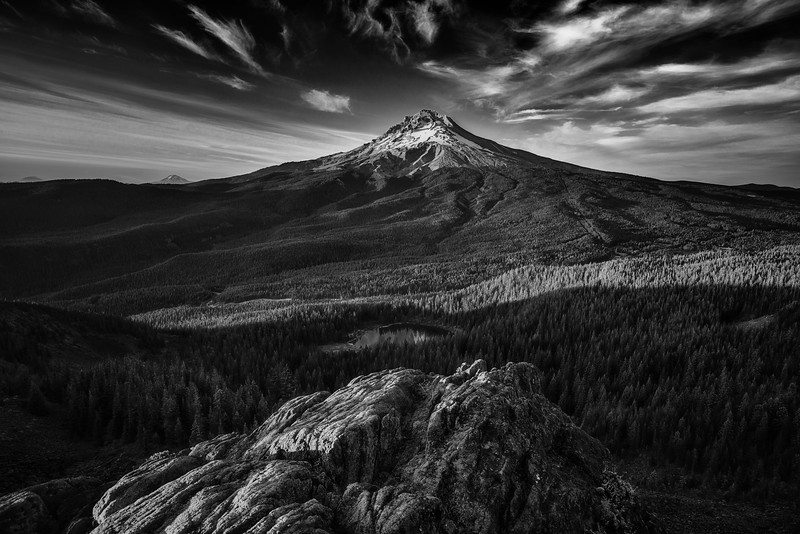 I've been here and laid eyes upon this scene a thousand times before, it seems...been skunked by featureless clear blue skies or flat sunset lighting due to haze on the western horizon more times than I care to recount. I was fully prepared for more of the same on this particular evening based on the weather reports, dispelling false hopes that the light might turn epic and the sky would "blow up" and "go nuclear." But on this occasion, it was so far from being about all that that all my prior treks up here seemed almost frivolous by compare. They never were for naught, of course, but it's all relative, and sometimes it takes some solemn occurrence to reinvigorate that raw-nerve rapture of being there...really, truly being there and staying in every electrified, life-affirming moment.

Sadly, on this otherwise fine midsummer's day, that event was the death of a friend...an online friend I knew through Facebook. I add that contextual annotation only because in this crazy, mixed-up Wi-Fi world of connectivity and social networking sites, a whole new dynamic of interrelationships between people has developed whereby the smaller extent to which our individual spheres may overlap is counterbalanced to some degree by overlapping with so many more people than was ever possible just a few short years ago. And so having never met Jeff Swanson in person, and not having had the history with him that those who knew him outside of Facebook shared, my sadness is necessarily marked with some degree of personal detachment by comparison. I don't think it invalidates my sense of loss, but it certainly does qualify it. And by the testimonials of those who had actually met him and knew him on a more personal level than I, there's an added layer of loss of never ever getting another chance to meet what sounded like one helluva guy. At least not in this corporeal world we call "life".

And so far be it for me to think that I could ever eulogize him here in the manner his life and his memory are truly due. That said, though, we shared a mutual interest in photography and thus many friends through Facebook and a few outside cyber life as well. He had one of the quickest wits in the West (or East, for that matter), and his comments on my threads and others' were always of the wickedly cerebral yet absolutely gut-busting variety. I knew he and his body were waging war against what ultimately proved to be an insurmountable foe, but what most came across so palpably through his words was his zest for life. I'm betting he battled harder than I or many of his friends ever really knew, because his effervescent smile and unwavering positive energy never once betrayed any of his struggles that I could see.

And so it was on this particular Saturday that I and super-freaky talented salts of the earth Erin Babnik, Alex Noriega, and TJ Thorne cobbled together a last-minute plan for a memorial hike in his honor. Forecasts everywhere called for crystal-clear skies, dampening prospects for any epic waterfall or mountain photography. But in the spirit of Jeff's happy-go-lucky ethic, we decided to just "f/it and be there." We arrived at the top of Tom Dick and Harry with plenty of time to scout for comps and shoot the shiz. None of us really expected to hike back home with anything very special in photographic terms, but the one must-do we accomplished on our collective list will linger well beyond the life of our camera's memory cards. I gotta think Jeff noticed: Between my and TJ's horrendous cloud mojo, those wonderful wisps of white that managed to persist through golden hour defied some serious odds. That kind of thing doesn't happen by accident. Not in my book.

So be mindful of today...be mindful of the present. I'm not of course suggesting you cast your responsibilities to the winds of hedonism and carpe diem, but the next time you find yourself bogged down by weighty expectations of the destination rather than the joys of the journey, just remember that tomorrow is never a given.

Jeff it and be there, my friends.