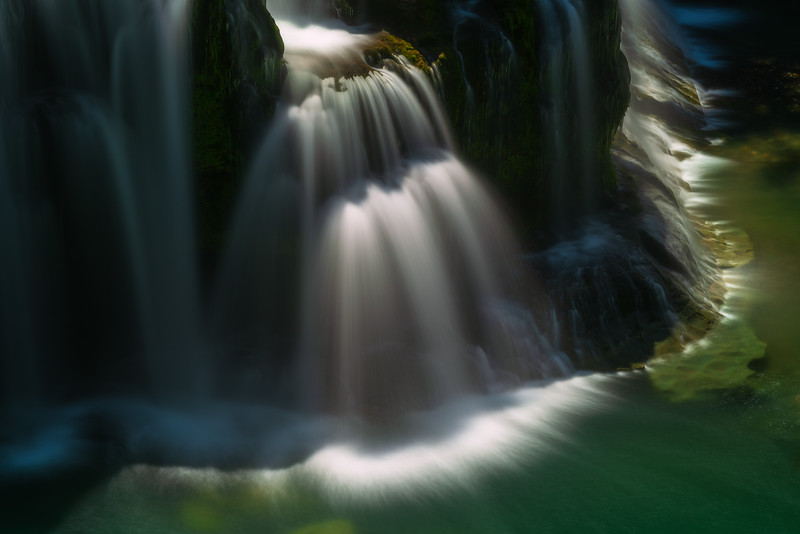 Mom and I arrived at the Lower Lewis River Falls parking lot and found that neither of us deserved to win our traditional game of Guess the Number of Cars at the Trailhead, even though technically I came closest. A shockingly scant three cars clustered near the restroom facility, testament to our early arrival after a long and winding drive hindered in spots by road construction. Time constraints limited us to a short trek just shy of Middle Falls, the straightforward path to which took a diverticular route due to a collapsed section of the trail.

By the time we got back to the parking lot it was just past noon, and we found the scene drastically changed from earlier that morning. Had we played the same bets on our return, both of us would have grossly undershot the guestimate this time, as vehicles packed the turnabout end-to-end with barely any breathing space between.

We should have anticipated it: Just prior to returning to the car, we stopped again at the Lower Falls and found its downstream flanks teeming with summer revelers delighting in the sunny shallows. Perhaps it was a wise move on their part, as the rising temperatures seemed to stoke the bold aggressions of the biting black flies, which seemed to grab onto our exposed skin preferentially using their jaws before their feet. On the bright side, the high-noon sun cast some interesting visuals on the wondrously complex falls, and there were just enough reprieves from people entering the scene to capture its shadowy drama sans human influence.