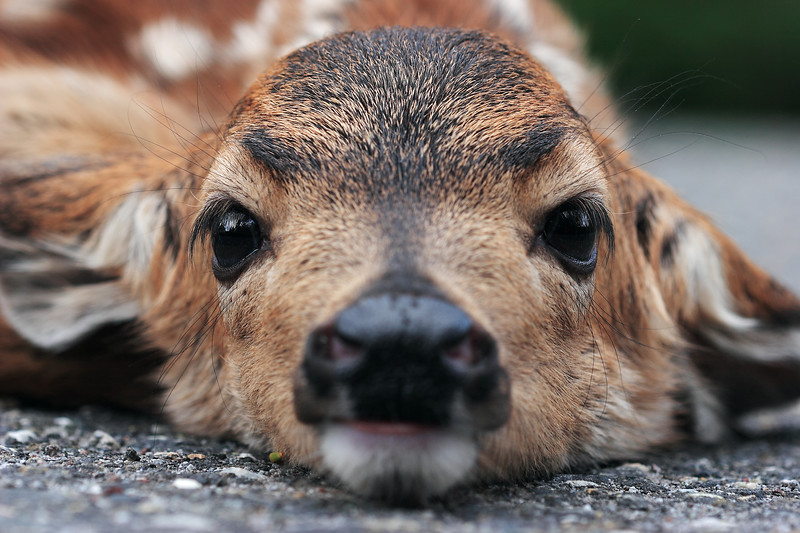 Have You Seen Mommy?

My hiking buddy Jeff and I were having the damnedest time trying to find the Sahalie Falls trailhead due to the partial snow coverage, and we drove up this road and then back down it when I noticed this little guy lying motionless on the pavement. Don’t know how (or even if?) we missed him on the way up. Stopped the car and went to town on the pictures. No matter how close we got, the little thing didn’t so much as budge. But for some very slight nasal flaring and respiratory movements of the flanks, you’d have thought it was dead.

When we realized it wasn’t, we decided it was just following instinct and doing what it was suppose to do (but why out on the pavement when the forest was just a few feet away?). So we drove off, found the trailhead, and hiked. Came back about an hour and a half later to find it was still lying in the exact same spot. Jeff wanted to check to see if it was alive, so he nudged it softly with his foot. It was definitely alive, but it just would…not…move… We went back to the car not quite knowing what to do.

Fortunately, a Mt. Hood Meadows or Timberline Lodge employee had driven up, and as he approached the fawn it got up weakly. He threw his jacket over it, which almost immediately subdued it, then scooped it up in his arms. Then he asked us if we were packing any lighter fluid or barbeque sauce. (KIDDING…)

He speculated that it was possibly only a few hours old (I suspected older) and was orphaned, lying on the sun-baked pavement for warmth since there was still snow on the ground elsewhere. Fortunately, he had a couple of buddies driving up who could take it down to a wildlife rehab center. I’m going to assume the best for this little guy (or gal—we didn’t check, assuming their bits and pieces are similar to ours) from here on out.