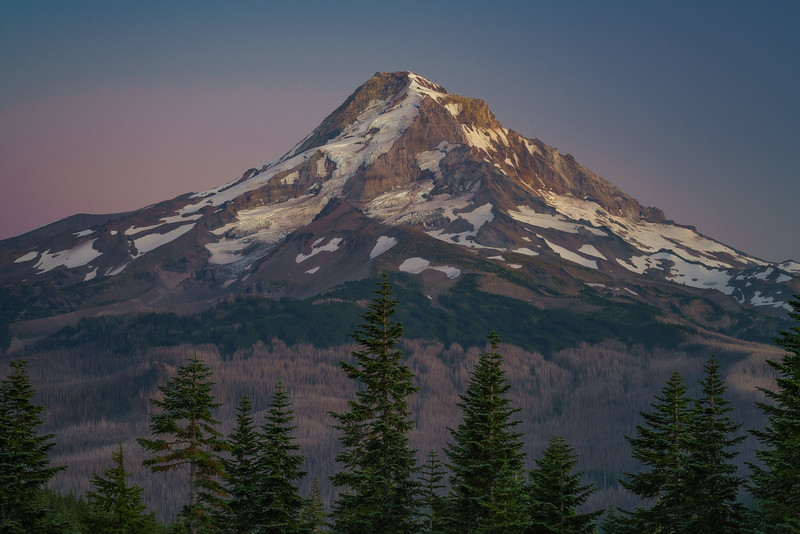 Mt. Hood looms with regal reassurance over a stand of nearby noble firs, showing off its stately north face in the pastel light of dusk.

Justin Poe and I had gotten a late start on the trail, and it offered us relative solitude and comfortably warm conditions in a summer rife with devastating wildfires, poor air quality, and oppressive heat. It was the kind of evening where one wouldn't be blamed for wanting to get down on one knee and propose to their partner with only the mountain and trees as witness. And before you get any thoughts about where this story is going, you should know that both Justin and I are already married. Happily. Not to each other. To two different women. That's one each, you sickos.

As it were, Justin and I both were troubled to learn later on the return hike to the car that we’d unwittingly ruined what should have been an unforgettably romantic moment in a young couple's new life together. First, Justin was approaching our final destination several yards ahead of me, rounding the corner to find the male half of the couple with his camera set up ostensibly to shoot the mountain but rather frantically trying to stall to keep Justin at bay: “Wait! Wait!”

It dawned on Justin what was going on, both of us having seen this gentleman together with his lady friend earlier on the trail. A rustle in the bushes off to the left and the young gentleman’s proclamation of, “Oh, it's okay now…no worries,” confirmed his suspicions, and a few seconds later the young lady emerged from the forest, looking equal parts embarrassed and refreshed. Justin hurried along uneasily to the viewpoint, and I met up with him there a minute or so later completely oblivious to how he and the young couple had ‘introduced’ themselves to one another.

In turn I told Justin about my own run-in with the same couple. Sometime after we got to the final viewpoint, I decided to double back to an earlier viewpoint (where this image was ultimately taken), and, aware that the young man had previously set up his camera in the direction of Mt. Hood and not wanting to ruin his shot, I called out, “Okay to come around the corner?” I didn't hear a reply so I ventured around the bend, advancing slowly just in case. As the couple came into view, I noticed the young lady in tears--obviously happy tears, even from that distance in the waning light--standing in front of her photographer beau. I figured the situation out pretty quickly and gave them a sheepish grimace at my impeccably poor timing.

“Sorry, he just proposed to me,” she explained as she wiped away her tears.

I feigned ignorance but decided to roll with it in the hopes of deflecting their passions back to their special, once-in-a-lifetime moment (for about 40% of the married population, anyway) rather than the agent responsible for the utter ruination of said moment.

“Oh my gosh! And you said…?” I asked, gesturing the question with my hands splayed out and praying to God I hadn't stuffed my other foot in my mouth on the off (but no less real) chance that she'd said no.

“I said yes!” and she proceeded to wipe her eyes some more.

“Congratulations!” I cheered, and then: “I'm so, soooo sorry for ruining your moment! But, umm, omigosh, how cool is that?? Anyways, I'll get out of your way now…” and I beat a hasty retreat into the woods, shaking my head in disbelief at my own ham-fisted attempt at a smooth extrication.

A short time later Justin rendezvoused with me as the last light of day faded away, and we eventually made our way back to the car, relieved to leave the day’s awkward misadventures behind us. Though we both obviously enjoy being outdoors, we also clue in well to when the gods are telling us it's time to take your ball and go home...