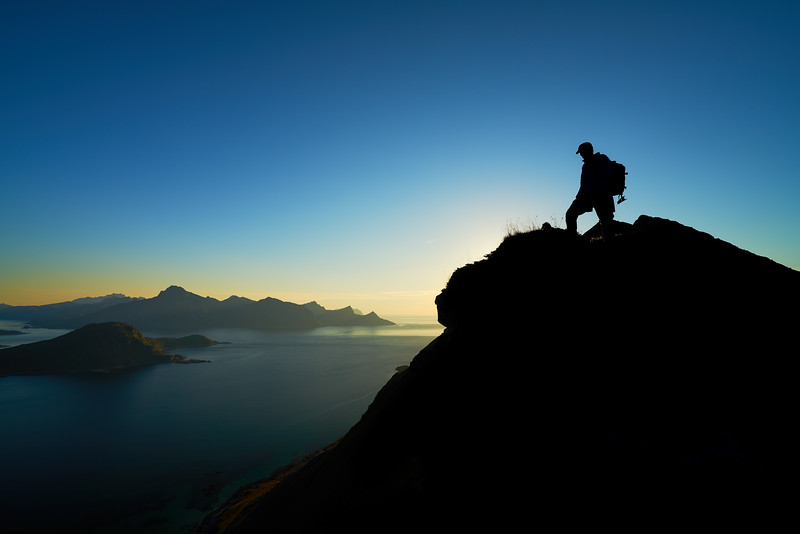 Ron Top of the World

After exploring and shooting our bit of Lofoten Islands largely from sea level, Day 7 of a largely sleepless whirlwind photographic tour found me huffing and puffing (on the tail end of an internationally-flavored cold, mind you) up the narrow spine of Mannen Mountain, jutting 400 dizzying meters above the beautiful surrounding seascape. Aussiie Tyler Hamilton led the way while I brought up the rear; between us, Aussie quipmaster extraordinaire Ron Holder took a moment to savor the stunning views of Utakleiv Beach to our right and Vik and Haukland Beaches to our left, the latter two lining Vikbukta Bay with its turquoise waters that could've easily passed for any tropical paradise were it not for the cool mid-40ºF temperatures that kept us nicely chilled despite the effort of the climb.

Later when I showed Ron this photo of him silhouetted like a boss against the late-day sky, he in classic Holder false-bravado humility instantly declared himself the latest and greatest spokesmodel for North Face (move aside, Ryan Ennis??). That's all well and good in Australia, Ron, but they're gonna need a North American counterpart...and the photographer was wearing these when he tripped the shutter. Unst.