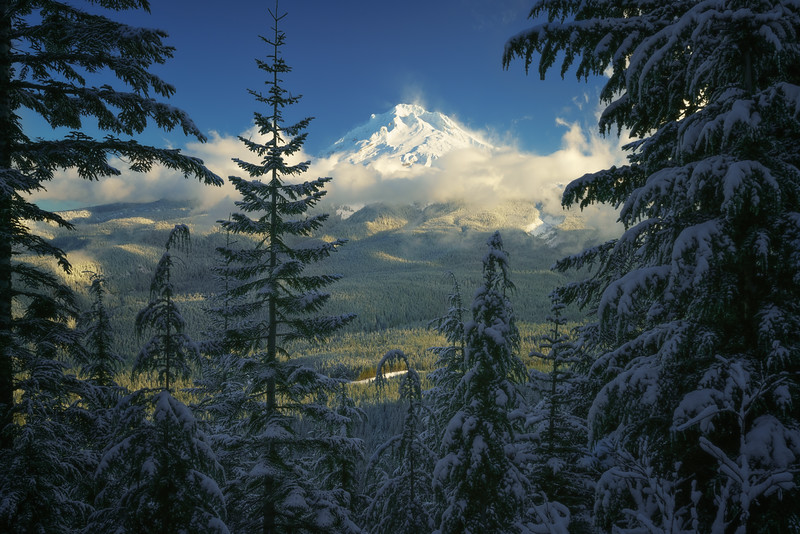 Despite as favorable a forecast to come along in a long time and circumstances granting me a mid-week sunrise hike, Mount Hood ultimately did little more than tease and tantalize Rami Jabaji and I during a pre-Thanksgiving meteorologic burlesque show atop Tom Dick and Harry Mountain. Hood never really revealed its full wares to us before the warm light of golden hour expired, its conical prominence scoffing at the regional forecast by generating its own maddeningly unpredictable microclimate. With nary an ounce of exaggeration, the ebb and flow of clouds obscuring the volcano countered every attempt I made to shoot it while the light was still good: When the camera was out, so were the clouds, blotting out the peak; pack the camera away to leave, and the mountain mockingly revealed itself just enough to have me second-guessing my impending egress from the summit. And all the while a fresh coating of powdery snow and a blustery soul-chilling wind presaged the even more bitter winter cold yet to come.

Despite having his tripod legs stuck frozen in the collapsed position, I think Rami managed to come away with a keeper or two through sheer persistence--or was it laziness?? Whatever the case, he only packed his camera away once...maybe twice...while I fumbled around with ever-numbing and -stupid fingers to set up my camera perhaps a half dozen or more times before finally calling it quits (the process may have entailed an expletive or two…). When the weather gods are that obstinate, it's best to lick your wounded pride and try again another day...though it was impossible not to feel like they really did have it in for me. By that time, the merciless cold had manage to seep through the six layers of clothing protecting my core, and my body centripetally shunted blood away from my periphery in an ultimately futile counter-attempt to keep warm. Indeed, several days out I still had some persistent (though fortunately mild) numbness in a couple of fingertips indicative of frostnip.

There were still some beautiful scenes to behold atop TDH afforded by that nice dusting of snow and an otherwise gorgeous sunrise, though, and not one drop of regret accompanied our deep chill and sleep deprivation. We even had the pleasure of meeting multi-talented photographer Jason Hattery, who arrived at the summit just as the sun was clearing the eastern horizon. Collectively we joked that the clouds might finally break up once we (or more specifically I) vacated the summit, and sure enough it did. Though we were well past the golden hour of dawn, the starkness of Hood's beauty against the bluebird sky was irresistible, and Rami and I welcomed the consolatory sight of snow-flocked evergreens on the shaded backside of Tom Dick and Harry.

Thinking my luck might have finally changed (or perhaps that my frostnipped fingertips were satisfactory celestial payment), we stopped by Mirror Lake for some final shots of the mountain. And like a virtual punchline, Hood hid itself behind a mountain-shaped cloud each of the three times I pulled out my camera. I’m sure to that point Rami thought I was kidding about my notoriously bad luck with mountain light, but now having witnessed and experienced it right alongside me, I think he fully empathizes with my infuriating lot in this world.

As for his maniacal cackling during my final debacle at Mirror Lake, I’ll just assume he finally got some ‘dad joke’ Justin Poe told him weeks ago...