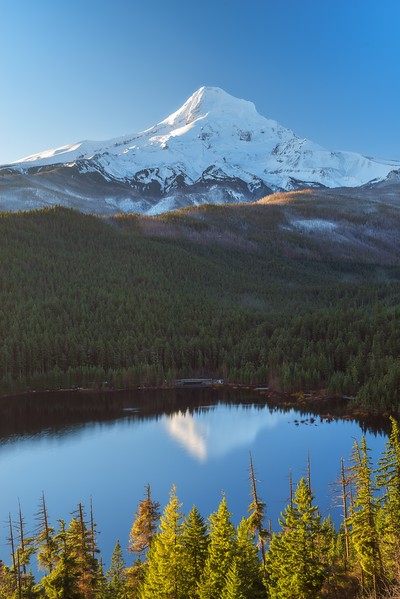 The Laws of A Traction

I have to admit, I lost a lot of sleep before the morning this shot was taken, and I think what caused it was equal parts anxiety mixed with excitement. Justin Poe, yet another supremely talented artist and out-and-out good guy (not to mention significantly younger and fitter guy...more on THAT depressing crap later) that the world of photography has introduced me to in recent times, had hit me up several days before saying that he was eyeing this location because he'd seen so few images of Mt. Hood made from this vantage point. He sounded a bit Captain Ahab-y to me, but perhaps something was lost (or gained?) in translation through Facebook Messenger...or perhaps all us photographer types kind of get that way when we decide to lock onto some object, site, or vision of desire.

The way things played out, Justin proved more a combo of Ahab and Nostradamus, as virtually everything he said to anticipate--a layer of frost and ice on the terrain, a trailhead just after crossing the dam that created Laurance Lake, and that there were several clearings amongst the large talus fields to offer some unobstructed view of Hood--came to pass. The only thing that caught us a bit off guard was the appearance of black ice well before we started traveling the Forest Service roads. I was maintaining even speed down a straight backroad through Parkdale's orchards when the tail of the SUV started drifting right. I managed to regain control without incident, but the going was slow from that point on as I had to frequently pump the breaks to test out the traction. Ninety percent of the time, there essentially was none.

So although we'd factored in a slower-than-hoped-for commute, we were closely approaching being in the red for time if our plans were to catch the first light on the mountain from our anticipated viewpoint. Justin stepped out of the car cautiously and immediately needed to grab hold of the car door: "Oh man, everything's iced over." For a guy who had called every shot like Babe Ruth to that point, it perplexes the poop out of me why he didn't think to tote along his Microspikes. I had my snowshoes in the car, but it seemed patently wrong to offer those up as a sort of punitive consolation prize, and dashing off on my own with spikes on both feet while leaving him to fend for himself at the car seemed a little bit cruel (even if well-deserved). So we shared the spikes between us, each donning one half of the set on our respective right feet, and quickly headed across the slick dam. The lopsided traction left us lurching a bit like mummies, but it took just enough danger out of our venture to make us look halfway sane.

We reached the trailhead across the dam and took off up the trail like a shot. Well, one of us did. The other moved more like a shotput rolling across a memory foam mattress. Justin's younger legs carried him swiftly up the switchbacking trail, and it was only by virtue of his steely determination that he never glanced back long enough to see me sucking wind like a chainsmoker on a NordicTrack. And it was only later after snooping around on Facebook and learning that he was a full dozen years my junior that I felt somewhat redeemed in being able to keep up with him to the extent that I did.

We finally reached some serviceable vantage points amongst some large open sloped talus fields, but our single-Microspiked status kept us from clambering over the boulders for better views. Compositions were challenged by obstructive elements to either side of us as well as the lofty position above the lake that clipped the mountain's reflection, but there really wasn't any arguing with the dramatic front-row view of Hood's handsome north face being kissed by the early morning light. I was really in it more for the discovery, adventure, and above all camaraderie rather than the photography anyway.

Although the next time homie leaves his Microspikes at home, he's on his own...