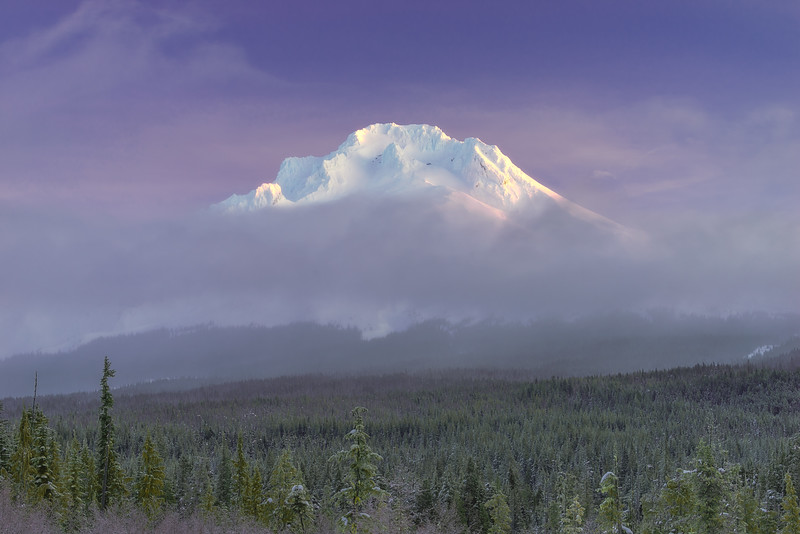 
Dawn's first light gently kisses the eastern face of Mt. Hood as the mountain miraculously breaks through the low-hanging clouds for its only and all-too-brief appearance of the morning. How it happened is beyond me, as the NOAA forecast had called for 90% cloud cover, and snow was falling all over the place when Justin Poe and I arrived at Ski Bowl East and chanced parking in the lot without a Sno-Park permit handy. That was kinda my bad. Okay, it was ALL my bad. Despite having TWICE stopped by REI the day before expressly for the purpose of purchasing the pass, I apparently let the rain smear the ink on my mental checklist. Again.


All props to Justin, then, for entrusting his very life to my suspect winter driving skills twice now (for those of you keeping count at home)...much less to trusting me to follow through on the simple task of procuring a parking permit to make the next day's adventure all on the up and up. But then again, whenever that mercury starts to flirt with the mid-30s, I morph into a Floridian nonagenarian who leaves home Saturday afternoon in order to make it to church across town by Sunday morning. Cars were whizzing by us like we were riding in a Model T, and I was just fine with that. Pride? Psssshhh. Must be a recessive gene...


And all credit again to Justin not only for conjuring up some major meteorologic mojo to defy the ridiculous odds for us that morning but also for gutting out almost the entirety of the time with a chilly wet foot he got while we were exploring the marshy but not yet fully frozen-over area. Despite having donned snowshoes, his left foot plunged knee-deep through terra infirma into ice-cold water hidden beneath a deceptively unpacked snowdrift. If that had been me, I probably would've whined my way back to the car in an expletive-laden (but guaranteed entertaining) monologue...but then again, I have trouble counting to twenty, and so I kinda need all my digits to still be there when I get home.


By Justin's own account, there was something instinctual in his bones that compelled him to push his chips all-in on this Hail Mary of an excursion, while I was perfectly content to call this nothing more than a scouting trip based on the gloomy forecast. As it turned out, he seemed to know or feel something I didn't. So yeah, I might have been helming the steering wheel on this occasion, but as it played out I was merely along for one hell of a cosmic karma ride, and by now you'd have a hard time convincing me this guy's not some kind of deity. And therein lies the deception to explain the title's double entendre, because dude's about as genuinely real a human being as they come.


Especially when it comes to traversing snow and ice.