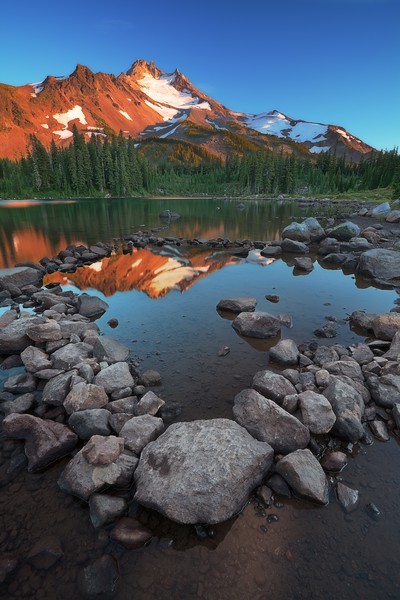 For three years, three long years, I've been wanting to return to this place, this veritable paradise of innumerable lakes and tarns and immeasurable beauty. Jefferson Park is a vast subalpine meadow that sits halfway between sea level and the 10,495-foot crown of broad-backed Mt. Jefferson, but don't bother using that fact to convince me that I was anywhere but in the middle of Heaven on this fine evening. The day was just about perfect: Air temperatures stayed comfortably in the low 70s during the day, dense afternoon clouds enshrouding the mountain gave way to mostly clear skies as had been forecast, bushes adorned with sweet huckleberries lined the 5.1-mile trail to Jefferson Park at regular intervals, and there were virtually no vampire bugs to speak of. Even the 49 vehicles aside from our own at the trailhead belied the relative peace and quiet we experienced along the way, as the longish trail and even the park itself afforded plenty of places into which the crowds could disperse.

The day was not without a few casualties, however. Walking down a steep slope into the blinding late-day sun claimed the ankle of my buddy Jeff, leaving him a bit hobbled on the nighttime hike back to the car, while my stupidity and insatiable lust for huckleberries left me with a bruised kneecap, the undisputed loser in a high-velocity confrontation with a huge rock (about the size of the one you see there in the foreground) when I thought it would be a good idea to go foraging for more berries in the dark of night. (It's not.)

But the one I feel most poorly about is that the frantic pace I'd set in pursuit of light sapped some of the leisure and fun from friend Dana's first-time visit to the beautiful park. In my haste to find a composition ahead of the rapidly approaching sunset, I'd forgotten that Dana was relying on me to navigate the confusing network of footpaths in the park, and no sooner than he'd set up his camera to capture an intimate nature scene, I was off like a prom dress and he and my mom were left scrambling to catch up. Yet had I not moved as swiftly as I had, I wouldn't have been able to capture this shot of Jefferson reflected in a weir of some sort constructed by campers past--the only comp I got off before the alpenglow vanished into the night. It was the fastest-moving light I've yet experienced in photography. So, my personal and sincere apology to you, Dana, but I hope this shot makes up for it at least a little bit. Sorry!