B sides and outtakes
Read More 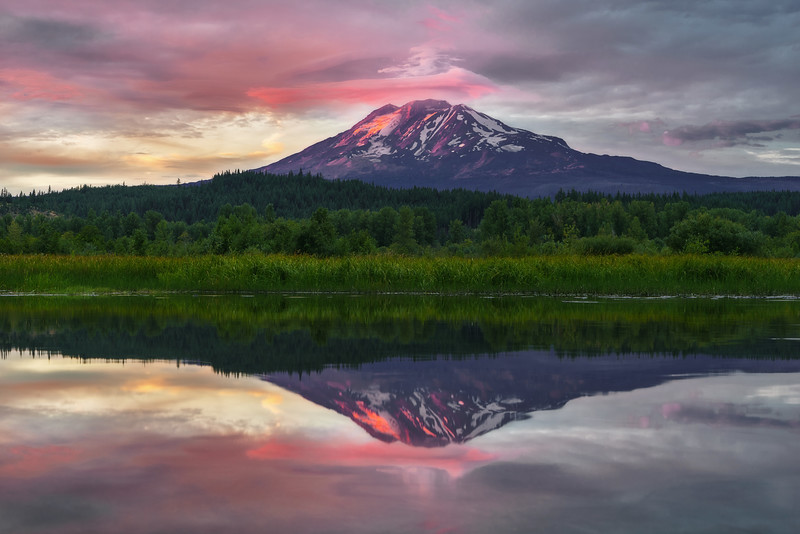 As Hans Is My Witness

Finally...a stretch of several days off...and me without any water. With pipe fittings failing systematically in my condo complex due to a part manufacturer's defect, a massive replumbing effort slated to last for months has me newly appreciating the first-world luxuries I generally take for granted on a daily basis. While ordinarily I wouldn't think twice about heading off into the wilderness to bask in the solitude of nature, the exceptionally hot and dry summer has drawn alabaster-skinned Oregonians to the great outdoors en masse while driving introverts like me back into hiding. Instead, I've had to resort to keeping my eye on various local volcano webcams, masochistically reveling in the torture of some truly epic sunsets that have taken place while I've been trapped at home for one infuriating reason or another.

At some point, though, something had to give. The mere exercise of composing an image and tripping the camera shutter can be therapeutic, a digital click-whir sequence that seems to advance the analog film roll in my soul, even if the image that results--as happens following 99% of the clicks of my camera--is pure toilet bowl fodder. Even Facebook seemed to be admonishing me to break the status quo, reminding me on my newsfeed that it was a year ago to the day that I'd published my image "If Tomorrow Never Comes", which champions the credo of "Jeff it and be there" (for those of you with shorter attention spans, it simply means to forget what the weather is doing and just get the heck outdoors, take your camera along, and enjoy the experience, regardless of what photographic fruits the effort actually bears). That apparently still wasn't quite enough, though, as I felt the weight of several perpetually-unfinished tasks still anchoring me to my domicile. So I vetted the thought past a trusted soul who knows my heart well and who, unhesitatingly, advised me to...well...Jeff it and be there!

So off I went, scampering frantically to get adequately dressed and trying to decide between a viewpoint of Mount Hood versus one of Mount Adams. I'd wasted a lot of time with my maddening indecisiveness by that point, and while I leaned toward heading to Larch Mountain with its favorable proximity and view of Mount Hood (and four other Cascade peaks, for that matter), the webcams suggested Hood was going to be snuffed out by the gathering clouds...a fact borne out as I headed east on I-84 and set eyes upon the barely visible profile of Larch Mountain. Hood itself was entirely obscured by clouds from where I was, and that was not a good sign.

So I gunned it past the off-ramp to Larch and raced against sensibility and self-doubt toward a seemingly fated Mount Adams finish line at Trout Lake. Those same hazy clouds that shrouded Hood seemed to be settling out over the western sky as well, obscuring the sun’s disk beyond distinction and filling the landscape with some terribly flat lighting. Every five or ten miles or so I'd wonder why the heck I was burning up all this fuel and irrecoverable time in pursuit of a pipe dream, but a tantalizing sliver of blue sky far off toward the east near where Adams was located reminded me that Jeffing it and being there was about the thrill of the chase and the visceral energy of the living moment, not any supposed promise of a catch. Nothing's ever promised, after all.

I made it to Trout Lake with barely 20 minutes to spare before the sun was forecast to set. Although Adams was readily visible beneath the high clouds and a tenacious if imperfect cloud cap, the flat lighting cast a rather dreary disposition upon the otherwise beautiful scene. Still, at that point I reminded myself that I was outdoors breathing in fresh air, listening to a bevy of songbirds and waterfowl announce the end of another hot summer day through a dyssynchronous but no less melodious chorus of tweets, honks, and hoots, and not another human soul was around--a rather surprising occurrence these days even for a Sunday evening. I set up my camera along the lakeshore and casually fired off a few shots, just to exorcise my stir-crazy demons and remind myself that I was pretty good at this photography thing once upon a former life.

A few minutes later, a van pulled up and parked, and out popped a gentleman who kindly regarded me before beating a hasty retreat up the little nature path heading off toward the northwest. After assuring myself that I indeed had showered that morning and it wasn't my suspect hygiene that drove him off so decisively, I turned my attention back toward the 12,280-foot peak and soaked up the solitude even as I knew I wouldn't be bringing home a single presentable image to commemorate the whole experience.

And that's when it happened.

The sun dipped down below the clouds in a narrow clearing above the western horizon just large enough to accommodate it for a few fleeting moments. Adams's western flank came to life, blushing a scintillating magenta and followed soon after by the cloud cap that dutifully lingered above its summit. The image here doesn't even depict the peak of color that ultimately developed...that image I'm still tweaking a bit to make sure it doesn't violate viewers' sensibilities and make them scream "PS!!" (that's "photoshopped!!" for you non-photography types) despite the actual authenticity of the incredible rubor that befell the mountain that evening.

And then, a mere three minutes later, it was gone. I kept the camera out a little longer hoping some nice twilight color might come around for a muted encore, but it wasn't to be. I was getting ready to pack things up and head home when the gentleman who'd scurried up the nature trail finally returned.

"Did you see that???" I can't honestly recall which of us asked the other.

All I know is that one of us said yes, and this very nice gentleman who told me his name was Hans something-such (I'm pretty sure it started with the letter A and ended in a 'tcz' sequence or similar) shared that he was a windsurfer visiting from St. Louis, Missouri, who was let down by the stillness of the Columbia in Hood River, Oregon, earlier that day and decided to follow pure whimsy and fate up Washington State Route 141 to this unassuming sign that said "Trout Lake Rd". He'd managed to fire off a few shots of the fireworks with his cell phone from the nature trail, and I ashamedly thought they looked better than what I suspected I was able to capture on my spendy Sony a7R.

Though I'd welcomed having the area all to myself at the outset, I ultimately was pleased--relieved, even--that I was able to share the moment with another human soul that evening, if for nothing other than the memory of a temporary camaraderie forged by validation of a mutually experienced minor miracle of sorts. Truth be told, the scene that unfolded was so gaudy with color and defiant of the meteorologic odds, I kind of needed another witness to authenticate how things really transpired. So Hans, if you're out there, buddy, I'd appreciate a good word if you don't mind terribly. ;)

And to you, Jeff, and to the one that knows my heart: Thank you. I wished I could've come away with a more spectacular image to honor you both, but seeing as I was owed absolutely nothing and got something at all, I owe you both a debt I know not how to repay. So I'll just keep winging it and pray to God it's enough...