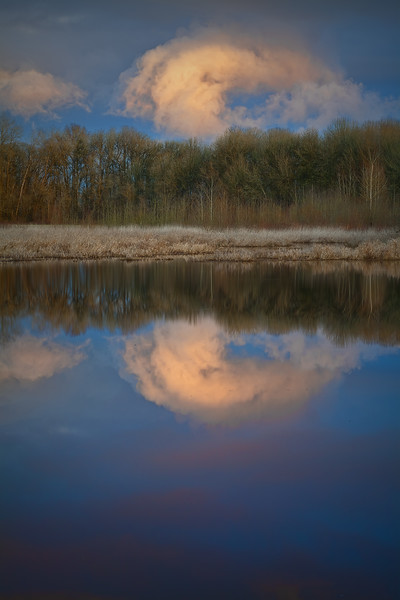 After a beautiful but bumbling trip to McDowell Creek Falls and Cascadia Park (I'd forgotten to bring my tripod on the latter hike) and passing up numerous opportunities to shoot some pastoral scenes bathed in golden light on the drive back, we took our chances with a short excursion to Ankeny National Wildlife Refuge, just to see what we could see as the sun was going down. If you can get use to the pungent stench of the surrounding cow pastures, it's definitely a place where you could spend your whole day with nary the threat of boredom. I assumed most of the faunal activity was settling in for the evening, but above our heads waves of geese flying in formation scissored in and out like rain-borne ripples in a vast slow-motion puddle, and a crescendoing chorus of frog song and owl hoots reminded us that the pulse of life beats on regardless of whether light of day or dark of night prevails.

While visible wildlife activity was modest at best ahead of the coming sping's migrations, the eyes couldn't help but be tickled by pretty scenes left and right that played like delightful vignettes in a longer lyrical narrative. Here, light from a late-afternoon sun bestows warmth to this strangely arcing cloud formation against a cool pastel sky before falling victim to intervening cloud cover on the far western horizon. A fair tradeoff, I'd say, for passing up all those photo ops with the fluffy grazing sheep on the drive in. I guess I'll catch them another time--just hope they aren't all buck naked by then...